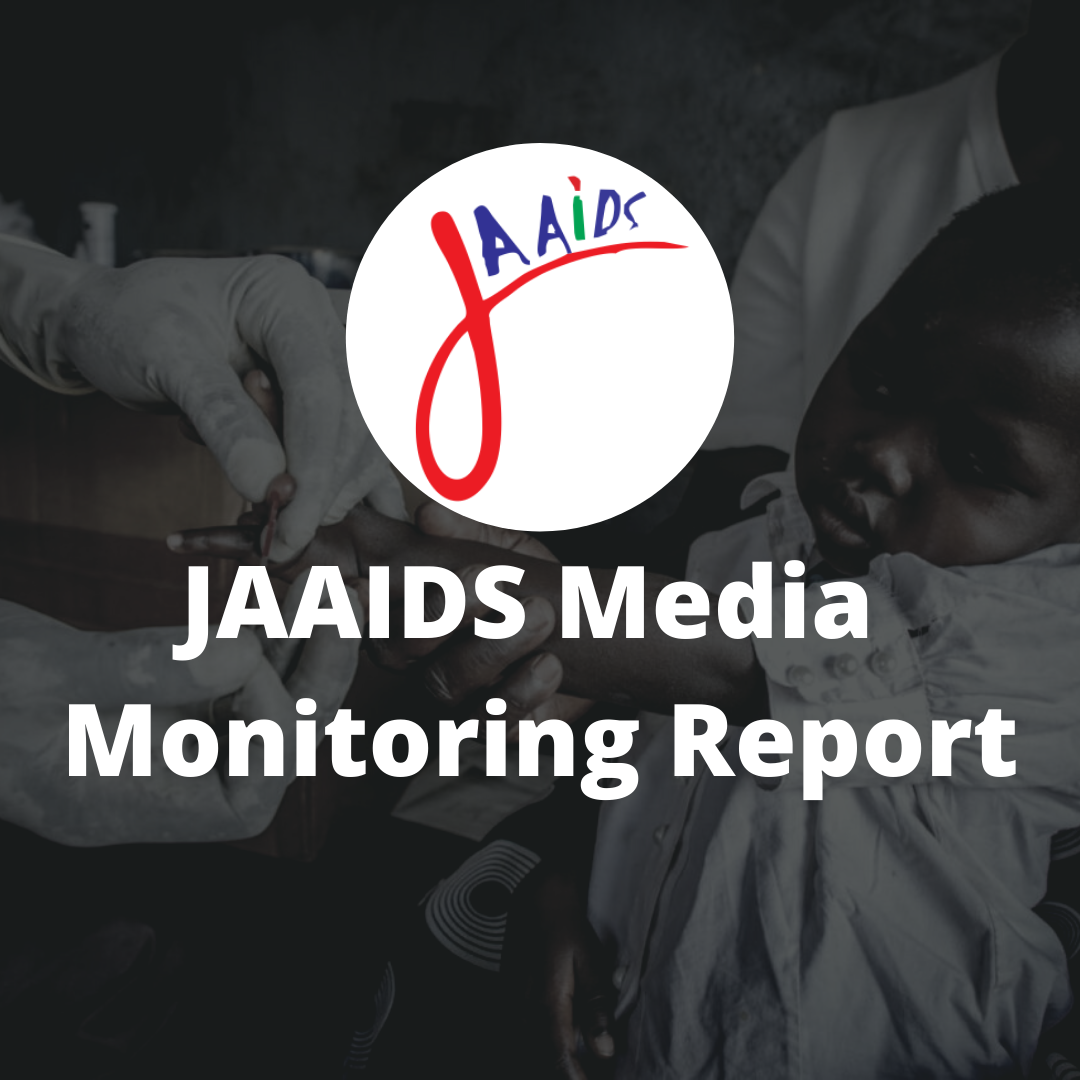 About 300 stories were published on HIV/AIDS by newspapers and magazines monitored in the month of August 2006. Encouraging as this seems not many of the reports, especially the features, could be described in superlatives.

However, “HIV in Children: Feeding a big Challenge”, a one-page feature report published in New Age on August 10, stood out perhaps due to the fact that it focused on children- the most vulnerable of all groups.

According to the report, beyond supplying anti-retroviral drugs, government must find a way of addressing the nutritional needs of children who are HIV positive because feeding is often a big challenge for them.

The reporter spoke with Dr Emokpae, a consultant pediatrician at the Massey Street Children’s Hospital HIV Clinic who was one of the experts quoted in the report and his remarks were enlightening. “HIV-positive children have very special nutritional needs as they ought to feed very well to avoid infections but poverty, often hinders this”

The story was obviously an advocacy piece which is really commendable. But beyond recommending that government should provide food supplements alongside ARVs, it’s equally important to highlight the necessity of bringing in more Polymerase Chain
Reaction (PCR) machines by the government a fundamental recommendation that was missing in the report .

This is because there are just about six of such in the country at present. Thus, the prevailing scenario where it is almost impossible to determine the status of a child born by an HIV-positive mother as fast as possible in any part of the country should not be
allowed to continue.

The harm that sub-standard medical laboratories sometimes cause was exposed by the Guardian in its August 10 edition in a news story headlined “Man makes N20m claims against hospital for alleged false HIV status”.

The man, Mr. Godwin Nnadi, executive secretary of the Nigerian Accounting Standard Board (NASB) instituted the court action against the medical lab for its error in giving him a result that shows he is HIV positive.

Accusing Mobile Check of alleged professional negligence, Nnadi asked the Lagos High Court to award him N20 million special for general damages he had suffered because the health institution failed to exercise due care, skill and competence in providing its services.

One good thing about the report is the eye-opener which it gives on companies who subject their staff to compulsory HIV testing before they get certain benefits.

In the news story, Standard Life Assurance Company Limited was reported to have contacted the lab to carry out a sociology test for HIV antibodies on the claimant on the instruction of NASB for a group life insurance policy for its employees.

It is necessary that the reporter writes a follow-up story on the matter to update readers on the court proceedings. But more than this, the reporter could also do a comprehensive report on the insurance industry to find out why discriminatory policies against PLWH still hold sway in the industry.

“How health care providers send patients to early graves”, is also one of the stories that can not be easily missed in the month. This two-page report was done by Saturday Champion on August 5.

The story notes that while medical personnel exist to provide prompt, efficient and effective care to individuals who suffer one ailment or the other, more so with the Hippocratic Oath they had taken, yet through their lukewarm attitude and sheer negligence, they often send many patients to their early graves. Apart from government-owned health institutions, the report says this also happens in private hospitals.

The much-celebrated case of little Oyinkansola Eniola, a baby who was transfused with HIV-infected blood at the Lagos University Teaching Hospital (LUTH) and the eventual sack of the hospitals’ Chief Medical Director (CMD) Prof. Tolu Odukoya by the Health Minister, was used as the launch-pad for the report.

The reader also gets to know about the pathetic case of a 25-year old woman, Mrs. Adebisi Akinlola who delivered her first child, a baby boy through caesarian operation, but died shortly after due to what relatives claim to be negligence on the part of the doctor who operated her.

The embattled doctor was said to have single-handedly carried out the operation and left for the General Hospital, Ikorodu where he was also on duty. Soon, the woman started gasping for breath. The auxiliary nurses he employed could not do much to save her until she died. The doctor was later arrested by the woman’s relatives and taken to the State Criminal Investigation Department (SCID).

The article, which was well-researched, featured interviews not only from patients who have experienced such maltreatments in the hands of care providers in the past but even medical doctors who are being accused of being too harsh on their patients.

The writers end with series of recommendations like medical professionals must be humane, caring and loving to patients under their care bearing in mind the strategic position which they hold in the nation’s quest for an effective and efficient healthcare
delivery system.

The piece also urges the government to address a situation where an average of two doctors attends to no less than 100 patients per day especially at government hospitals, thereby making them highly susceptible to irritation and aggressiveness.

The story is also significant bearing in mind that it seeks to address the stigma and discrimination which people living with HIV sometimes face in treatment centres across the country.

The slow response of some Nigerian companies in putting a place a definite policy on HIV/AIDS in their workplace formed the focus of a story in the Daily Independent on August 1.

While so many companies would often jump at any initiative that would cheaply portray them as socially responsible organizations like bankrolling the cost of maintaining gardens and other projects, the story notes that most Nigerian companies are yet to adopt
the National Workplace Policy on HIV/AIDS as put in place by the Federal Ministry of Labour and Productivity over a year ago.

This, the report, adds, is particularly ironic when records show that the groups of people mostly affected by HIV/AIDS are those within the 15-40 age-brackets who represent the most active group of the population. In essence, this makes the business sector more affected.

While commending the initiative that give birth to the Nigerian Business Coalition Against AIDS (NIBUCAA) which has over 35 companies as members, only few of
these like Cadbury, The MTN Foundation and Chevron among others have deemed it fit to have a policy. The report asks other companies to stop foot-dragging on the matter by putting in place actionable intervention activities to prevent and educate their workforce.

The same issue formed the focus of editorial published by the Champion on August 18: ‘Workplace HIV/AIDS Policy’.

Much as it is commendable that these newspapers encourage business organisations to institute workplace HIV policies, do they have one in their own organizations already? Or are media practitioners exempted from HIV infection in the workplace more so when the nature of their work often promote office romance?

In deed, media organizations need to put the search light on their own selves since their staffs, like other professionals, are also affected by HIV and AIDS.

Other newspapers who wrote editorials includes Financial Standard-Illicit drugs and spread of HIV/AIDS, published on August 2, and National Mirror-‘Fighting HIV/AIDS: The Bayelsa Example’ on August 6. The Sun, The Punch and This Day
published editorials on the Baby Eniola Saga at LUTH on August 9, August 10 and August 13 respectively.

Newspapers like Punch, National Mirror and The Guardian among others published stories on 16th International AIDS Conference which held during the month in Toronto, Canada as well as the research efforts of some scientists who claim that the use of
lime and lemon juice could help prevent HIV infection. However, most of the stories were culled from foreign sources except for the Guardian which stood out due to the presence of its correspondents at the conference.

Inappropriate use of language was not really evident in many of the stories except ‘Tackling the AIDS Challenge’, an opinion article in the National Mirror on August 18. Even though it makes interesting read, the use of inappropriate adjectives like ‘AIDS
sufferers and AIDS victims’ dented the effort. Reporters must remember that it is more appropriate to write ‘people living with HIV’ instead.

All the newspapers and the magazines published a total of 292 reports in the month. Of these, 171 were new stories, 99 were feature articles while 16 were advertorials. A total of six editorials were published in the month by Daily Mirror, Guardian, Punch, The Sun, This Day and Financial Standard. Guardian led with 38 reports closely followed by The Sun with 36 and New Age with 28.

Like it was explained earlier, many reports in the month cannot be described as being outstanding because they were either reports based on events or opinion articles with one or two quotations from other sources to add more “credibility” to the story.

Hence, beyond attending seminars and workshops, individual reporters need to develop their own story angles on HIV/AIDS-related issues then come out with investigative stories which would not only draw attention to critical areas in the national AIDS
response, but also stand out among the pack, and most importantly, win awards which can advance their own careers.

Reporters also need to sharpen their presentation skills to ensure that their reports capture and hold the attention of readers. While individual reporters can take this initiative themselves, their organizations can also organize continuous training for their staff towards building their capacities in this regard.

The 18 newspapers monitored are:

The magazines are:
Insider, Newswatch, The News, The Week and City People.

The JAAIDS Media Monitoring Service is a project of Journalists Against AIDS (JAAIDS) Nigeria offered to the media and other interested readers. The service provides feedback through objective analysis and incisive commentary on media coverage of HIV/AIDS in Nigeria to journalists, so as to facilitate informed and effective coverage of the epidemic.